No, I haven't had a gender reassignment. This week's Horrormoanal Woman blog post is a guest contribution to the Creative Process Blog Tour from successful novelist, Ed Chatterton - author of the gripping Frank Keane thrillers, A Dark Place to Die and Down Among the Dead Men.

Over to Ed (also known as Martin for his illustration work)...


Is anyone really interested? Writers, myself included, are such appalling windbags. I’m always astonished at the idea that (a) I know anything and (b) anyone would be interested in hearing about it. Anyway, with that said . . .

I have bitten off much more than I can chew. Ever the work slut, I have taken on too many projects and I’m now paying the price in sleepless nights, hypochondria and heavy drinking. 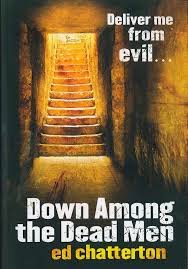 I’ve just started the second draft of my third crime/thriller book, tentatively titled Eighty Eight. This follows on from A Dark Place To Die and Down Among the Dead Men.

I’m also working on a novel as part of my PhD. This is called The Last Slave Ship and is a multi-narrative fiction which combines a story of a contemporary race-hate crime (and subsequent civil unrest) in Liverpool with an account of a ‘supernatural’ campaign of rebellion and resistance aboard the final slave trade voyage to leave the city in 1809. The book is an attempt to re-examine Liverpool’s legacy of involvement with the slave trade but is also a work about memory, amnesia, Hillsborough, class, race, the media, Antony Gormley, angels, redemption, vengeance, punishment, shame, blood, identity and the slippery nature of time itself. Oh and it has a killer ending even if I do say so.

The third item on my desk is a Middle School book I’m co-writing with James Patterson (yes, that James Patterson). This is something of a technical project as I’m attempting to slip into a world and characters that already exist in the form of previous Middle School books. The carrot I’m getting offered is the obvious added exposure of being associated with the Patterson brand. The stick? The possibility of failure on a massive scale and public humiliation.

There are other things on the go: Archangel, a YA sci-fi novel spun off from my PhD which is at about halfway point and I’m illustrating three books for other authors (Allison Rushby, Jonathan Emmett, and Phillip Simpson). While all this is going on I’m also putting together a Secret Project which may take me in a completely different direction.
How does my work differ from others of its genre and why do I write what I do?

This will be a stream of consciousness sort of thing. Part rant, part moan, part insight. Like everything...


The honest answer is that I don’t really know how my work differs because, as with all the books I’ve written, I’m making this stuff up as I go along. I don’t trust writers who claim some sort of career strategy. Maybe the one thing I can claim is that all my books are much more layered than they appear. I’ve written a number of children’s books that deal with death, time, physics, Shakespeare, crime and punishment, and fart jokes. The last Frank Keane novel was loosely based on the Greek myth of Theseus and the Minotaur in which my unarmed protagonist has to engage with a powerful enemy in unfamiliar surroundings. While there was a physical echo of the Cretan labyrinth in one of the Liverpool locations (the Joseph Williamson tunnels), the ‘real’ labyrinth is the shadow world of US geo-political covert operations. In the current novel, Keane’s physical and moral decay find an echo in the rise of neo-Nazism in Berlin. I choose to write about this stuff using the framework of ‘crime fiction’ but it could just as easily be dressed as ‘literature’.

I don’t read much contemporary ‘literary’ fiction now. Too many books in the ‘crime’ genre seem to be formulaic and often badly written. Obviously mine are an exception. Some contemporary writers I do like a lot are David Mitchell, Mark Haddon, Richard Price and George Pelecanos all of who can write me (and most people) under the table. To make my jealousy worse, Mark Haddon was also an illustrator. Bastard. In Australia – where until recently I’ve been spending most time –  I admire the work of Krissy Kneen the erotic writer, although I have to admit I do struggle to engage with most Aussie writers other than Krissy, or Tom Kenneally. My loss, I’m sure.

Most of my writer heroes are dead. PG Wodehouse, Evelyn Waugh, Patricia Highsmith, Joseph Heller (is he dead?), HG Wells, Conan Doyle, Kingsley Amis, Graham Greene. Dead writers tend to be better writers. Why this is, I’m not sure but I think it’s linked to the decline in pipe-smoking and drinking cocktails at 5 and being stoic. I’ve started wearing tweeds in an attempt to stop the rot. One of the tragedies of my life is that my inner voice is a clipped Trevor Howard type of thing, while my real voice is sadly more in the region of Steven Gerrard’s nasal monotone. I can’t imagine a trilby-wearing Stevie G on the platform with Celia Johnson no matter how hard I try.

The reasons I write the books I write are varied. Before I started writing ‘crime’ I wrote ‘comedy’. Now I’m writing (or attempting to write) ‘art’ for want of a better word. Money plays a part, as does the voice of anyone who wants to publish me. Basically, like most creatives, I lurch from project to project like a minesweeping drunk at closing time. I actually think the book as an entity is dying in the sense that content consumption has shifted. Books are now guzzled like sweets – which is probably why so many are written by cooks. Cooks! Jesus, is this what we’ve come to?

This shift towards imbecility has been accelerated by everyone on the planet thinking they should be a writer. They shouldn’t. At the risk of sounding like some sort of Victor Meldrew type, why is everyone in the world now hellbent on trying to be a singer or a dancer, seemingly without any scrap of ability? What happened to paying your dues, learning your craft and knowing the business you are attempting to squeeze into? Bah. Nurse, where’s my tea?

The best tip for becoming a writer? Make sure you are privately educated and keep writing debut novels. If necessary you should change your name from book to book. The biggest regret I have when I went into writing crime was not choosing a Scandinavian pen name.

There’s always the feeling that there’s a neat trick to this but the sad truth is that writing is incredibly demanding and quite often deadly dull. You just sit down and start writing. Then you do it again and again. Assuming you have an idea of the subject, and the basics of grammar, spelling, sentence construction, dialogue, plotting, drafting, editing, character development, pacing and the like are all in place, then the process is just a matter of piling words on top of one another in the correct order. If they’re not in the correct order then a decent editor will tell you.

I have been moving around too much in the last year to have a routine. Projects are being completed more through the fear of missing deadlines rather than via some refined process. This has had the effect of stopping me becoming precious (I think) about how I write: I just write. Doing the PhD has startled my long dormant brain into some focused action and now I think my stuff (commercial and otherwise) is a lot sharper and deeper than previously.

I usually kick an idea around for a long time before starting work on it properly. This might be years in some cases. I do plan a little, but mostly I have an idea about the set up for the book without a clear idea of where it is going. I change and rewrite as I go, often writing the first five or six chapters over and over until I have the tone and pace in my mind. I’m happy if the characters take the book in a different direction. I can’t abide books in which characters are made to do things that they wouldn’t do simply to take the plot where the writer thinks it should go. I’ve stopped reading books sometimes when that happens. I like plot but it should happen naturally, driven by the characters in the drama.

Posted by The Horrormoanal Woman at 08:00