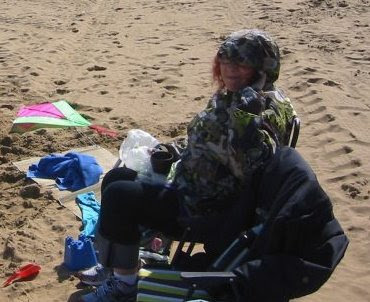 Nobody likes wet socks. Right? And nobody really hankers after freezing their tiddies off. Do they? And it definitely makes sense, in the event of having to walk a mile through horizontal rain, to wear an anorak and put the hood up. Or is that just me? Utilitarian Woman. Thelma from Scooby Doo.
Lately I have been feeling aggrieved at the regular sight of what my mother calls Flighty Birds – young and pert women trotting with bouncy hair through the daily downpour, wearing high heels and almost invisible skirts. I hope they’re going to work. I would feel better if I knew they were just another office drudge like me. But I strongly suspect they might be going shopping to Harvey Nicks, where they will max out Daddy’s or Hubby’s platinum card on a load of designer crap. They are like colourful birds of paradise in an urban, grey jungle with their stick legs, yellow hair and orange faces. They look sort of nice in a highly groomed, designer label-clad, conformist way.
Cowbags. How dare they? Am I the only sour old bastard that looks at these extraordinary creatures and thinks, how come your feet don’t get bloody wet in the rain? How is it that you don’t feel the 11 degrees of cold and can wear a waist-length flimsy jacket, flashing your flat stomach and gravity defying arse? And here I am, dressed up like Nanook of the North in my sensible Goretex walking shoes. I catch my reflection in windows of smart shops that contain mannequins dressed just like these show-ponies but instead of seeing hot totty, my reflection shows me Ranulph Fiennes with droopy tits, a sodden handbag and slightly more toes.
Why? Why are these women different from me, with their impeccably trowelled-on makeup and perfectly coiffed hair? I have makeup but the school run and herding children always stands in the way, leaving me with no energy to put it on or take it off. My hair is so unruly and crap that I stopped bothering forking out on a real hairdresser fifteen years ago. Instead, I have a man called Stan who comes to the house and gives me a dry trim for £6. He tells me that my crowning frizz is “like fanny hair but not as nice”. I’m in fairly good shape too because I run a lot but whereas these flighty birds look like gazelles in leggings, I manage to look like Samwise Gamgee in drag. I only ever buy skirts to hang in the wardrobe “Just in case” because, let’s face it girls, who the fuck fancies a Force 10 gale blowing up their woo woo when they could be armoured against the elements in trousers?
But this thing with the flighty birds: it was ever so. At college, twenty years ago, they had the lads queuing up to worship them. They always had tresses of long hair which they would flick with panache at the men, marking their territory like a dog peeing on a lamppost. These girls cried a lot in public and simpered. I thought they had hairspray between their ears and nothing more. But the lads were intoxicated by their ability to wear hot pants and high heels in the snow. They would walk to the ends of the earth for these girls just because their fanny was a bit visible through their leggings and they had really long hair. In later life, I see these girls as women in their late thirties, pushing expensive three-wheeler prams, still perfectly groomed, wearing Uggs and beatified grins and coaxing their fragrant, Jottum-clam offspring in gentle musical tones to the Audi Q8, whilst the rest of us drag our ketchup-stained, mouthy Borstal Bills to the cruddy finger-marked, bird-shit splattered crapwagon, where they will kick chunks out of each other all the way home because of a badly divided chocolate biscuit.
So there you have it. Women like me with strong characters and sound minds can earn our own dollar, tile a bathroom and make a good dinner from scratch. We make our own beds and notwithstanding the odd forgotten, half-eaten sandwiches, we lie in them happily. But these creatures, these 24/7 Barbies, in a box-fresh state of perfection with real plastic and space on the inside of their heads are actually the alpha females. They move through life effortlessly on a cloud of whimsy and want in their high heels and sheer tights, impervious to all weathers and with almost visible muffery. And when their arches finally collapse, they will be carried onwards by a throng of adoring men who would always rather settle for Daphne than Thelma out of Scooby Doo.
Posted by The Horrormoanal Woman at 08:13